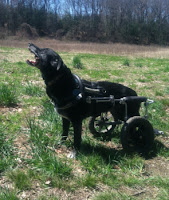 I love dog park for a whole bunch of reasons. There are no cars in the park so I don’t have to be on leash which means I can run fast and far and Mom doesn’t worry. There are big hills to climb, woods with lots of trees to sniff and grassy fields to play in. There is a place where the little river comes up near the path and we dogs can jump in and swim or get a drink of cold water. I could be at dog park all by myself and have a fun time but the very best thing about dog park is that there are always lots of other dogs who go there too.


There are all kinds of dogs.  There are big dogs and small dogs, old dogs and puppies. Some dogs like to play tag, others like to carry sticks or chase tennis balls. When I go to dog park, I see some of the same dogs and we are now old friends. Even better than seeing old friends, every time I go, meet new friends. And you know you can never have enough friends.
One of my friends is named Charles. That’s Charles in the picture above. Charles goes to dog park almost every day with his mom and his sister Em. Charles and Em are both rescue dogs and have lived with their mom for a long time. He’s eleven years old and his back legs don’t work good any more but that doesn’t stop Charles. He gets around just fine with his special cart. He goes so fast some times that his mom has to make him slow down. He can go up and down the hills, run in the fields and even go in the water.
All the dogs like Charles cuz he is very friendly and happy.  Some times when we walk with Charles and his family, we meet people who ask about his cart.   Charles has a sickness that makes his back legs not move but his front legs work just fine.  His mom straps him into the cart so it keeps his whole back end up and his front legs make the wheels carry him around.  I am happy he has his cart because otherwise, I would not get to see him and play with him when I go to dog park.
Today is a beautiful day and Mom said we are going to dog park.  I hope I see Charles there and we can walk the paths and go to the river to get a cold drink.
Posted by Marie and Zeva at 5:24 AM No comments:

Superman and Batman Have Nothing On These Real Heroes! 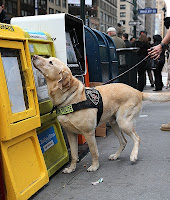 Oh Boy! What a week!  I live with my Mom and Dad in Western Massachusetts, not in Boston, but lots of our human friends and family members are athletes and run in the Boston Marathon so when we heard about the bombs we were very scared.


Mom stayed at her computer, following Face Book and Twitter and Dad watched the TV news.  So much happened so fast.  Boston Police, Massachusetts State Police and so many other law enforcement agencies ran to Boston.  Not much was said on the news, but some of those who responded and who where there doing their jobs were Explosive Detector Dogs, otherwise known as Bomb Sniffing Dogs.

These dogs are my heroes. My human grandmother lives near a State Police Barracks where they have a K-9 agility course built by the members of a local Boy Scout Troop as the project for one of the Scouts to earn his Eagle Scout ranking.
Sometimes when Mom visits, I can watch the dogs run the course.  I would love to try but I know you need special training to do agility and even more to be a real Bomb Sniffing Dog.
Bomb Sniffing Dogs start their training like all of us dogs in Obedience Training.  They have to learn all the normal stuff like sit and stay.  The only difference is that they can be trained in different languages.  Where I learned to “sit”, “stay” and “come, a Bomb Sniffing Dog might learn to Sitzen Sie, bleiben Sie, kommen Sie or sente-se, permaneça, venha.
How cool is that?!  Bomb Sniffing Dogs speak several languages.
After regular Obedience Training, they get special training so they can focus under distraction.  These dogs have to work in big crowds, where there are lots of noises and smells and they even have to work when there is gun fire.  I have trouble focusing when I see a bird or a squirrel.
Bomb Searching Dogs learn how to sniff out all kinds of scents like dynamite, plastic explosives, TNT, detonation cords, ammonium nitrate and a whole bunch more nasty stuff that can be used to make bombs.
They learn how to search buildings as well as cars and packages.  The different types of searches required different types of training.
I think the Bomb Sniffing Dogs that patrolled the race route before the race and those who went back in after the explosions, when there was a real danger of more bombs, were very brave, as were their human partners.  I read that four dogs from Rhode Island came to help the Massachusetts dogs.
This was a very bad thing that happened and it was wonderful that so many humans, including non law enforcement humans, helped in so many ways.  I am especially proud that some of those who helped were canine.  Dogs Rule!


Zeva
P.S.  Shameless self promotion.  If anyone deserves one of our To The Rescue Gift Basket, it's a dog who is on the job.
Posted by Marie and Zeva at 7:51 AM 1 comment: 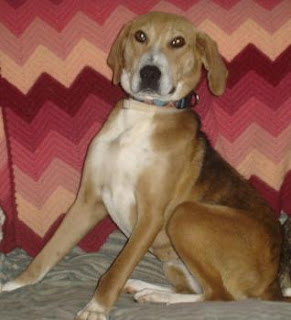 I said in my last blog that I was getting a sister but I had to wait until she got her heartworms treated and she wasn’t sick anymore.  Well, she got all of her shots and she is now resting so she can come and live with us soon.
Here is a picture of her.  She is kind of cute, but I am still cuter.


Bringing a new dog into our house is a big deal.  We never met Dixie, that’s what Mom named her, but we are pretty sure she will fit right in.  First of all, I am a very friendly dog.  I haven’t met a dog I didn’t like (except for that one dog at dog park and he started it), anyway, I get along with all the dogs at day care and when other dogs come to my house or I go to their houses, we get along fine. I don’t mind sharing my toys either.  Dixie is living with two other dogs now and she is happy and friendly.  She knew right away that she wasn’t the Big Sister in that house so I’m sure she’ll know that I’m the Big Sister here and we’ll get along fine.


I’m looking forward to having someone to play with all the time.  I’ve mentioned before that humans are okay to play with but they get tired fast and they don’t run very good.  Mom thought Dixie would be a good second dog because she is close to my age and size and has an easy going temperament.  She also has a high energy level like me.  Mom likes that because we can tire each other out.  Everyone knows a tired dog is a good dog.


Mom is getting our house ready for her.  We’re both going to have our own food and water dishes and our own crates so we can have a place to go that is all our own or when Mom and Dad both have to leave us alone.  If we are in our own crates we can’t get into any trouble.


Getting a second dog is a big step and we are doing everything we can to make sure it is not stressful for Dixie or me (or Mom and Dad).  I can’t wait to show her all my tricks like what is the best way to beg for cookies and how to play inside the door/outside the door.  It is going to be so fun.

If you live in a two dog house (or more) let me know.  Tell me what you did to make it a nice place for everyone to live.


Your friend (and almost a Big Sister),


Zeva
P.S. Shameless self promotion - I think I'll get her one of our My Own Dog Cookie Tin Gift Baskets so I don't have to share my cookies with her...
Posted by Marie and Zeva at 9:03 AM 4 comments: